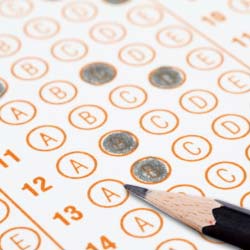 I am student from India on the stage of passing out the school and starting a new mode of life i.e.. getting into the college. But as we know that it is not easy to get an admission in a good college in India competition is on the peak in every field and students are fighting and working hard for achieving their goals.
What I as a student had noticed in the entrance system of the Indian colleges is the mode of selection and amount of the application forms that the colleges are charging and for what. The first thing to notice is that none of the college(expect some) while taking the entrance test or giving admission to the students don't charge less then Rs.1000 and many of them are even charging the amount of RS.2000 approximately.

What are advantages and disadvantages of such practices?

I had thaught a lot about this thing and only get a single answer that it is nothing more then a big burden on the pockets of parents. don't think it in this way that when someone can pay RS.1,00,000/year for the tuition fee then what is RS.1000 think this in a way that a student who had prepared a lot for entrance in a good college and now the time has came when the form should be filled now a good/average student will fill the form of approximately 5-10 colleges and many of students even fill the forms of more then 15-20 colleges because its not good to take risk with carrier. now if we take average cost of application form to be RS.1,500 then for an average student's parent this is a burden of RS.15,000(1,500X10=15,000) and we all know that Rs.15,000 is not a small amount of money in India.
Now you would had got what I want to tell to you people.

Many colleges even don't conduct their own entrance examination

I had gone through some of the colleges who are also charging RS.1,000+ and even not conducting their own exams they are taking students on the basis of AIEEE (All India engineering entrance exam) and regional Pre engineering tests. Now what are they doing with this money the answer is using for their own interests as they have nothing to do with students.

Some colleges are really doing well and they dis-serve the money they are charging.

Some colleges such as BITS ,IIT's , AIEEE disserves the money they are charging for the application forms as they are conducting the proper tests and the best one from these three is AIEEE as it is the cheapest paper for engineering entrance and is valid all over India.

I am not saying that all the colleges are looting student's money but this is a bitter reality that many of these colleges are doing what I had mentioned.

I had mentioned only the examples of engineering clleges please don't mind it this was because I am an engineering student.
Posted by Unknown at 12:36 AM

Email ThisBlogThis!Share to TwitterShare to FacebookShare to Pinterest
Labels: corruption in school, NEWS