What had happen to our brains. Such a cruel behavior with a child

How cruel we people have become we even don't think before doing something evil days ago I found a thing which was really disgusting I will not mention the name of place and people but will definitely tell you that how disgusting we have become. 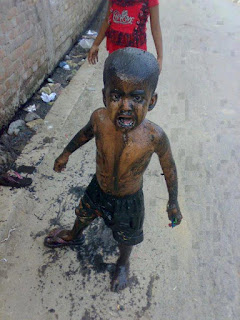 Hear comes the news that some young boys I think that they were of collage had done something really disgusting they have thrown a small child into a dirty street as you can see in the picture in which there was waste material of all that village and after that they started shooting his pics and playing football with his sandal which is their lying near the street.Over not hear only they had started sharing this pic via Facebook. In this pic as you see that the child is crying any they are putting funny comments on this child.

Now what we can say about the people of our country that how disgusting we are we are not even thinking before doing that what we are doing. This child was treated in such an abrupted way that I lost the believe from my eyes for a second.
Friends we have no right to tease someone in this manner.
Posted by Unknown at 3:00 PM

Email ThisBlogThis!Share to TwitterShare to FacebookShare to Pinterest
Labels: NEWS